"You never stop outing yourself" I once heard Kundalini yoga teacher Carolyn Cowan say in a podcast interview.

Today we speak to Mark on his journey of Self Acceptance and how Yoga helped him heal.

I'd never heard it framed that way before, but it struck me how profoundly right Carolyn Cowan was. You never really stop coming out as a queer person. You have to do it again and again; when you meet new people, when someone incorrectly assumes your orientation or preferred gender, when someone comes to visit your home and asks about your relationship status.

Sometimes it's a lovely, liberating experience. Sometimes, in that moment, you must endure judgement and humiliation all over again. The shame of failing to be born 'normal' can be overwhelming, even if it sometimes seems to be a feeling stuck on repeat.

Coupling constantly coming out with the ongoing issues within the gay community itself (body shaming, transphobia, racism and drug abuse) and the journey to self-love, it can feel long, painful and often out of reach entirely. Is it any wonder so many LGBTQ+ people simply give up?

I wish I could say that I used Yoga and meditation as my sole road to healing. But I'm afraid I'm human and, along the way, made some very human mistakes. I may have 'come out' at 24 but, in many ways, I was still living a lie, trying to be the person I thought I should be rather than who I was and seeking a way to heal.

In truth, Yoga began as another avenue to validation; a way to look a bit boho-chic on Instagram, a way to improve my body and look good doing it. Preferably in a very zen Lotus Pose.

Yet what I soon discovered in those classes was something 'other'. Yoga had something that no other form of movement had, and little by little, I began to discover things about my mind and body that I never had before. I made connections that I had never previously made. I began to feel a deeper relationship developing between myself and I. Those times in class without phone, email or assorted other pressures were liberating, especially in a world where it can feel like you're constantly apologising for being you.

As movement and posture opened new areas of my body, I noticed new ideas and avenues of my mind opening too. As I quietened my mind and delved inside through meditation, I noticed new options becoming available in the physical asanas and poses. I realised I was caring less and less what it looked like on Instagram and more about how it made me feel.

A few years down the line, I even came to terms with another truth: the corporate queen I was pretending to be was not who I really was. Just like constantly coming out, the healing journey to our own truth is ongoing. It was Yoga and the practices around it – meditation, journaling, honest introspection – that helped me come to terms not just with my sexuality, but who I am as a person.

Many LGBTQ+ people are scarred already. Those scars can be aggravated rather than alleviated in a community where beauty is practically a currency, and status is too-often measured, somewhat ironically, by adherence to traditional hetero-normative ideals of wealth and stature. But happily, Yoga is an ongoing and ever-evolving practice too. If we approach the practice without judgement or expectation, it will always give us what we need. Not necessarily what we want (I still can't do a Lotus Pose) but certainly what we need.

Bit by bit, embracing the Yoga practices have helped me heal some of those scars. They're not a magic fix-all, but a practice which advocates staying in the moment, not setting your self-worth by the external, and not allowing the ego to dictate your actions is a far better habit to turn to than some of the options I, and many others in the LGBTQ+ community, have tried.

Coming out may be a challenge that never really stops, and one that extends far beyond your choices in the bedroom, but happily some things, like Yoga and the slow self-acceptance that comes with it, are a gift that you can keep giving yourself.

Join Mark on the mat for his Pride themed classes this Saturday 11th September: 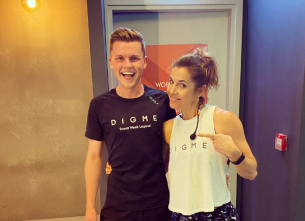 SPEAKING AS ONE WITH THE COMMUNITY

We speak to Sam, from Digme Fitzrovia, who shares his journey and allyship with the LGBTQ+ community

Move with your body and uplift your mind with our three 30 minute mindful vinyasa flows. 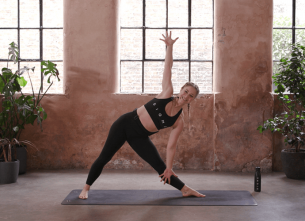 This Monday marks International Yoga Day, but for us, every day is a celebration of Yoga and our Yoga community! Tune into our brand new 7 day Power series