Pregnancy and exercise: the facts 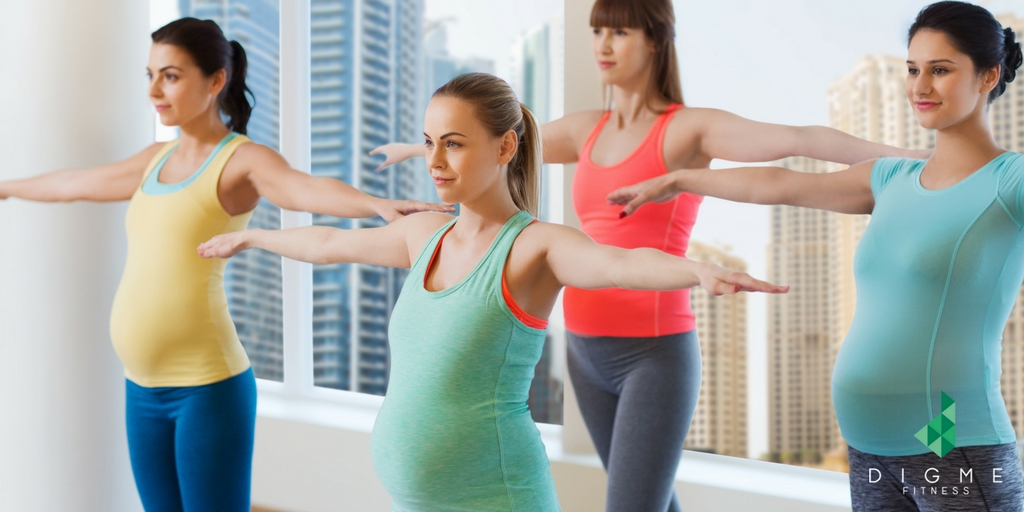 When it comes to exercising during pregnancy, advice is pretty scarce and often very vague, so many women are confused about what they should and shouldn’t be doing.

We sat down with our Head of Fitness, Dan Little, to bring you a clear and comprehensive guide to what’s safe both for you and your baby. We also talked to Caoimhe Bamber, Digme’s founder, who exercised all the way through both her pregnancies and has some sound advice for mums-to-be.

We should stress that anyone who is pregnant should always check with their doctor first, but once that’s done, this is a good guide. Exercise has been proven to reduce many pregnancy-related niggles, and mentally it’s always a great mood booster.

In the first trimester, you’re more likely to feel sick and more tired than usual, so it’s important to listen to your body and don’t do more than you’re able to. If you feel up to exercising then great. The baby is well protected at this stage so it’s safe to do most sports, but best steer clear of impact activities or anything where you might fall heavily, such as skiing.

Caoimhe said: “The best advice I was given was to continue whatever you did before. If your body is used to exercising a lot, it’s fine to do so during pregnancy. It’s not the time to introduce tough new exercise regimes into your life or try new activities you didn’t do before you got pregnant though, so if you’re new to fitness, ease in very gradually.

“Women are often scared to exercise when they’re pregnant but they shouldn’t be. I always found it eased any ailments I had. I suffered from morning sickness pretty badly both times but exercise was the one thing that helped it.

“I can’t stress enough how important it is to stay fit. You need strength to be able to cope with the extra weight as the baby grows, and to prepare you for labour. It also helps you get back into shape very quickly after the baby is born. And doing pelvic floor exercises every day is a must.

“When I’m not pregnant I do push myself very hard, but when I am, I rein it in a lot. I still did something six days a week, but my effort level was lower. You shouldn’t push yourself to exhaustion. My doctor said that you should be able to sing – if you can’t because you’re too out of breath, you’re working too hard. If you train with a heart rate monitor, aim for about 20 beats per minute slower than usual.”

In the second trimester, you will hopefully feel much more like yourself, and the nausea and fatigue should have subsided. You need to be careful with your joints, as your body produces a hormone called relaxin which makes your ligaments more stretchy and elastic in preparation for the birth.

This can cause your joints to be looser, so you’re more prone to twisting an ankle or straining something. if you’re running, be particularly careful when changing direction.

Caoimhe said: “When I was about 20 weeks pregnant with Ben, my second, I picked Alex, my eldest who was two at the time, up from the floor and felt something funny in my hip. I later discovered I’d strained some ligaments and had to take a month off running, but luckily I was allowed to cycle as it's such a low impact exercise.

You should also avoid exercises which involve lying on your back from about week 16 onwards.

By the third trimester you’ll be carrying considerably more weight, so it’s inevitable you will feel more tired and awkward moving. Exercise is still fine as long as you feel comfortable, but be careful with cycling outdoors because your sense of gravity changes and can make you off balance.

Caoimhe said: “I ran right up until the night before I had Ben, albeit a very slow plod for about four kilometres. Spinning was my default workout – I just had to raise the handlebars higher than usual to make room for the bump! Typically I’d do 50 minutes to an hour at a time.

“One day when I was fairly heavily pregnant with Alex I walked all day around London, and when I got home my feet were really swollen up. I called my doctor and asked if a run would help and he said to give it a go. I did a very easy jog along the towpath for half an hour, and when I got back my feet were back to normal.”

The most important thing we can emphasise is that if you are thinking of getting pregnant, you should be aiming to get in great shape. It's widely believed that being fit and strong helps conception and will stand you in great stead for the pregnancy ahead.

If you have any questions, speak to one of the staff in your studio who will point you in the right direction. 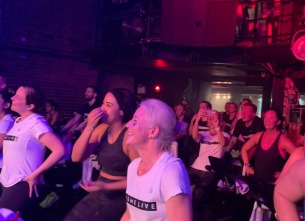