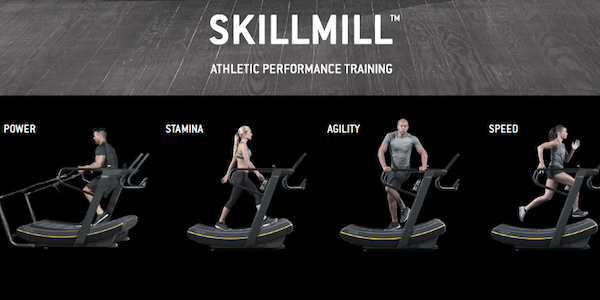 My excitement levels went through the roof on Monday when I went down to Technogym headquarters in Bracknell to do some testing on their SkillMill.

It’s their newest bit of fitness equipment and since it launched in February this year it’s become really popular with numerous professional football clubs, including Chelsea, and was used by athletes at the Rio Olympics.

We’ve bought eight of them for our new Oxford studio and we’ll be the first studio in the UK to incorporate them into group HIIT classes. It’s so exciting to be pioneering something, and hopefully the people of this great city will love the unique, innovative programme I’ve put together.

Technogym have nailed it with the SkillMill. It’s the first product that allows you to improve power, speed, stamina and agility, and it’s controlled by whoever is using it, rather than by a motor.

The beauty of it is how incredibly simple – and yet still fun – it is to use. It has just one resistance control, and everything you do on it is powered by your own feet.

You can accelerate quickly from a standing start, or you can just walk or jog on it. You can add resistance to make it harder – you’ll often see rugby players turning it right up to simulate the type of effort and strength they’d need in a scrum.

Each one has a console monitoring data, so users can track and store their workout and achievements, and the dual handlebars mean it suits people of all heights and sizes. Another plus is that by being powered by the user, it reduces our carbon footprint.

Get ready for some great workouts in Oxford. I can’t wait to unleash the THREE programme I’ve created, which will be based on the three fundamental principles of run, condition and move.

Throw in some kettlebells, plyometric boxes, TRXs and human movement patterns and you’ve got one hell of session that’s going to challenge you in so many different ways. With our amazing spin studio also at the Oxford site, you’ve got everything you need under one roof to be in the best shape of your life.

WHY MUSIC MATTERS TO YOUR WORKOUT

Have you ever had that moment in a workout when an epic tune drops, your spine tingles and your effort levels up?